What famous men have said about the Jews 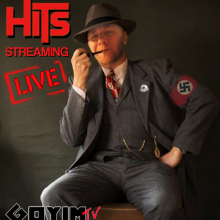 Hits
Published on Jul 28, 2020
What World-famous Men have said About the Jews
Introduction
The Jews are the only people in the world who have found hostility in every country in which they settled in any numbers. The big question is -- WHY?
Today it is taught in the schools that "Anti-Semitism" began in Germany in the 1930s after which they were deported. What is not studied is the fact that at one time or other the Jews have been expelled from every nation in Europe! When the Jews first began to immigrate to America the early colonialists in New York, Charleston and Savannah tried to ban their entry. Benjamin Franklin pleaded with the members of the Continental Congress to enter a specific ban against Jewish immigration into the U. S. Constitution to bar them for all time to come.
The Jews claim that they are "only" a religion. The truth is that the Jews are a RACE. Less than 30% are members of any Synagogue. Whether they are Orthodox religious, atheists, capitalists or communists -- they still claim to be Jews -- members of the Jewish race! Every race has inherited traits. In the case of the Jews they include trading, money-changing, usury, and a loathing for "productive labor" which is scorned as beneath the dignity of the Jews in their "bible" called "THE TALMUD."
The Jews have not changed since the days when Jesus Christ took up a whip and drove "the money changers out of the Temple." Jews have always united to form monopolies. Today they control all the department store chains and specialty shops along with the lucrative jewelry and animal fur trade. Jews dominate the fields of all precious metals such as gold, silver, platinum, tin, lead, etc. They will always ban together to drive Gentile competitors out of business.
Today America is being flooded with Jewish immigrants from Russia and even 20,000 per year leave Israel for the U. S. -- all with dollar signs in their eyes. Jews have used their vaunted money-power to seize control of the Democratic Party and constitute over 50% of all its financial contributions. Today they are buying up more and more major U. S. companies. While only 3% of the population, the Jews control over 25% of the nation's wealth and this percentage rises every year. They are the only racial group totally organized to work for political domination over America.
Opposition to the Jews did not begin in Germany but dates back before the birth of Christ over 2,000 years ago! Study the statements made by "The world's greatest men." They reveal why the "wandering Jews" have made enemies out of every host country that ever accepted them.
CICERO (Marcus Tullius Cicero). First century B.C. Roman statesman, writer.
"Softly! Softly! I want none but the judges to hear me. The Jews have already gotten me into a fine mess, as they have many other gentleman. I have no desire to furnish further grist for their mills." (Oration in Defense of Flaccus)
Cicero was serving as defense counsel at the trial of Flaccus, a Roman official who interfered with Jewish gold shipments to their international headquarters (then, as now) in Jerusalem. Cicero himself certainly was not a nobody, and for one of this stature to have to "speak softly" shows that he was in the presence of a dangerously powerful sphere of influence. and on another occasion Cicero wrote: "The Jews belong to a dark and repulsive force. One knows how numerous this clique is, how they stick together and what power they exercise through their unions. They are a nation of rascals and deceivers." http://www.biblebelievers.org.au/repu...
"Requiem, K. 626. Dies Irae" by Neville Marriner, Academy Of St. Martin In The Fields Listen ad-free with YouTube Red
Music in this video
Learn more
Listen ad-free with YouTube Premium
Song
Requiem, K. 626. Dies Irae
Artist
Sir Neville Marriner, Academy of St. Martin in the Fields, Academy Of St. Martin In The Fields Chorus, Laszlo Heltay
Licensed to YouTube by
UMG (on behalf of Fantasy Records); Public Domain Compositions, and 10 Music Rights Societies