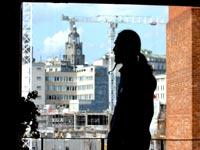 The TRUTH About The Third Reich.
“At any given moment there is an orthodoxy, a body of ideas of which it is assumed that all right-thinking people will accept without question. It is not exactly forbidden to say this, that or the other, but it is "not done" to say it... Anyone who challenges the prevailing orthodoxy finds himself silenced with surprising effectiveness. A genuinely unfashionable opinion is almost never given a fair hearing, either in the popular press or in the high-brow periodicals.”
- George Orwell
"It is not the Germany of the decade that followed the war-broken, dejected and bowed down with a sense of apprehension and impotence. It is now full of hope and confidence...one man has accomplished this miracle...the old trust him; the young idolize him. It is not the admiration accorded to a popular leader. It is the worship of a national hero who has saved his country from utter despondence and degradation...I have never met a happier people."
- David Lloyd George, Ex-Prime Minister, UK.
"I don't believe I'll ever see again a people as happy and content as were the great majority of Germans under Hitler, especially in peacetime. Certainly some minorities suffered: former parliamentary politicians - because they couldn't play their political games; the Jews - because they lost their power over Germany; the gypsies - because during the war they were required to work; and crooked union bosses - because they lost their parasitical positions.
To this day I believe that the happiness of the majority of a people is more important than the well-being of a few spoiled minorities. In school there should be emphasis on promoting the best and the intelligent, as was done in Germany during the Hitler years - a fact that contributed after the war to the rapid German reconstruction. That Hitler was loved by his people, there can be no question.
Germany under Hitler was quite different from what the media would have you believe.”
- Hans Schmidt
Please Watch First:
EUROPA - The Last Battle [Part 1]
https://www.bitchute.com/video/QtLvxZ9d0yEY
EUROPA - The Last Battle [Part 2]
https://www.bitchute.com/video/Q1fxNvkgFDWY
To get the ultimate red pill on WW2, the JQ and all the major historical events surrounding it, watch parts 4-10, which will give you the full picture.
Meanwhile, for more information:
Questioning The Holocaust - Why We Believed (Part 1 of 2)
https://www.youtube.com/watch?v=RddqP0ABzwM
The Greatest Story Never Told
http://thegreateststorynevertold.tv
The First Holocaust : The Surprising Origin of the Six-Million Figure
https://www.youtube.com/watch?v=yBnMtkbWPCs
When the war broke out, enemies were interned in concentration-camps to avoid the risk of espionage or sabotage against the Nation. As an example, after having joined the war, over 120,000 Japanese people who lived on the Pacific coast were interned by President Roosevelt - with no crime other than being born Japanese. Executive Order 9066, signed by President Franklin Delano Roosevelt, was issued on the premise that anyone of Japanese, German and Italian descent could not be trusted and was to be treated as an enemy.
They were viewed not as individual people, but as a menace to be dealt with harshly, thus thousands of Americans of Japanese, Italian, and German ethnicity were forcibly relocated & thrown into American concentration camps.
In 1933, when international Jewry had declared war upon Germany, they formally established themselves as an enemy of Germany which, according to international law, gave Germany the legal right to disarm and intern the German Jews. Revisionists do not dispute that Jews were persecuted, deprived of civil rights, deported, interned and forced to work at concentration camps or that Jews died in those camps and ghettos during the war, when diseases became a major problem. Neither do they dispute that criminal Communist partisans, which a majority of were Jews- were killed by shooting and hanging during the wars. Officials from the International Red Cross visited the German camps regularly & had complete access to the camps, documented everything & estimated the total dead from ALL the camps to be around 271,000- 290.000. Most of them died of typhus.
However, revisionists do not deny these Jews and other victims of the war their dignity, they do not deny the victims to be remembered, and they do not deny to show compassion for any of the victims. No matter how they died, each and every one of these deaths was a tragedy as were the deaths of millions of others during this horrific war.
For the truth about the holocaust, please watch: EUROPA - The Last Battle [Part 8].
https://www.bitchute.com/video/6pHi4VqLkhZ7
Official page for the documentary: https://europathelastbattle.wordpress.com