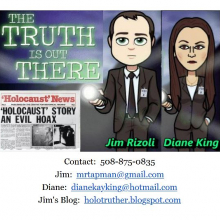 Holotruther
Published on Jul 16, 2020
I had uploaded this yesterday and got a lot of suggestions to fix the volumes so that the narration and Hoffenberg clip were easier to hear. It's too important to get Maria's story out and I didn't want their voices to be drowned out by the music so I made the changes.

This is a condensed version of the three hour phone call between survivor Maria Farmer & investigative journalist Whitney Webb. I’ve included all of their discussion relating to Mossad, Mega Group, Les Wexner, and Israel. These are the key pieces of information that the mainstream media won’t touch and is in fact complicit in keeping this decades long blackmail operation continuing. Jeffery Epstein was not the head of the snake, he was only mid management and was assigned by Israeli Intelligence to work for Ghislaine Maxwell in the 80’s, who reported to billionaire Zionist Les Wexner. The operation continues without him.

If you aren’t too familiar with the Jeff Epstein story and would like to understand more, the new (gatekeeping) Netflix docuseries ‘Filthy Rich’ is a decent start to catch you up with the information that the MSM is allowed to discuss. Unfortunately it’s meant to control the narrative and gives voices to victim harassers like Alan Dershowitz, Vicki Ward, & James Patterson, along with making Wexner out to be a victim of Epstein which is both insulting and ridiculous. But it’s a good way to get the basics of the story, and it’s good that the story isn’t fading from people’s interests in light of all the distractions going on around us (COVID-19 & the American Intifada). Anyways, I hope those of you that understand the importance of exposing this international sex trafficking blackmail operation will help get Maria Farmers story out by sharing or downloading & re-uploading this video to your social medias. She’s been all over the mainstream media being the first victim to ever come forward to the FBI, however she says they cut out about 85% of what she has to say. Hopefully this will spark your interest to listen to the full unedited phone call between Farmer & Webb, because there’s a lot I didn’t include in this video. You can listen to it here:

Too Big to Fail: the Epstein Investigation :
https://www.mintpressnews.com/category/epstein-investigation/


Hidden in Plain Sight: The Shocking Origins of the Jeffrey Epstein Case:
https://www.mintpressnews.com/shocking-origins-jeffrey-epstein-blackmail-roy-cohn/260621/


Jeffrey Epstein, Trump’s Mentor and the Dark Secrets of the Reagan Era:
https://www.mintpressnews.com/blackmail-jeffrey-epstein-trump-mentor-reagan-era/260760/


Mega Group, Maxwells and Mossad: The Spy Story at the Heart of the Jeffrey Epstein Scandal:
https://www.mintpressnews.com/mega-group-maxwells-mossad-spy-story-jeffrey-epstein-scandal/261172/


The Genesis and Evolution of the Jeffrey Epstein, Bill Clinton Relationship:
https://www.mintpressnews.com/genesis-jeffrey-epstein-bill-clinton-relationship/261455/

Whitney Webb is working on writing a book that covers the intelligence aspects of the story. Keep an eye out for her book in late summer! She’s amazing!

Please feel totally free to re-upload or share this video. I provided a download link because I want to encourage people to expose the criminal Zionist network. The more the REAL story gets out there, the more likely we can bring justice to the victims and put these gangsters away! Wexner, Maxwell, Barak, Netanyahu, Rothschild, Lauder, Bronfman, and Dershowitz are all villains who have been complicit in trafficking children around the world in order to blackmail the political elite to control them for Israel’s agenda. They must be exposed!