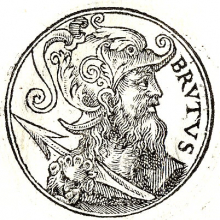 Brutus_Of_Goy
Published on Apr 5, 2021
Alan Wilson and Baram Blackett discuss their research in the hunt for King Arthur. Artorius Rex had been found and was clearly two separate King Arthur's, one a son of Magnus Maximus of the 4th Century AD, and the other King Arthur (Athrwys ap Meurig) was of the 6th Century AD.

A Resurrection of Wrongly Discarded British History
Sixty years ago an unprecedented onslaught was launched against the most detailed and best preserved history in Western Europe. The attack on South East Wales history was made by G J Williams from North Wales who alleged that a few dark age poems were not of the pre-1367 era, but were instead forgeries written around 1800. This allegation was made over the BBC state-controlled radio and no challenge was allowed. Like a computer virus this then spread to further absurd allegations which gradually encompassed the entire corpus of South East Wales ancient history. Everything was now alleged to be tainted and forged. The result was that academia ran for cover and totally avoided the entire subject.

This book "Artorius Rex Discovered" is the first attempt to resurrect this wrongly murdered and quite innocent dark age history. The fact is that this incredibly detailed history stands up to examination in hundreds of ways whenever tested. If the forgery allegation were true, then we are invited to believe that over a period of 1000 years several hundred scholars, bards, monks and even one King who wrote a history, all combined together from all over Wales to produce a totally interlocking fabricated history, complete with ancient ruined castles, forts, manors, battlesites, graveyards, named grave mounds, churches, ancient inscribed stones, skeletons in stone coffins, and even a vast 2000-year old ancient ironworks!

Hundreds of complex interlocking genealogies - all of which fit together with the records in the ancient poetry, cathedral charters, the histories, the triads, and the inscriptions on over 200 inscribed stones - lay such a solid foundation that there can be no question of forgery.

The authors of this book enter where others feared to go. They took the ancient histories, read them, and went along the trails which the histories directed. Time and time again what is alleged to be a forgery turns out to be truthful, authentic and factual.

Thrown out with the rest of this abandoned history, are the Kings of Wales. These include King Arthur II, the son of King Meurig, who was in turn the son of King Tewdrig, all of whom have traceable graves. Several hundred other Kings, Princes and noblemen have traceable graves. Some 200 of them left inscribed stones. Arthur II leaving four inscribed stones, Tewdrig one, and Teithfallt the father of Tewdrig one, and so on.

It seems to have been forgotten that all 167 ancient Bruts of England firmly state that King Arthur was crowned as King of Glamorgan, South East Wales. Mallory placed Camelot in South East Wales, and Y Seint Greal of AD 1106, the much longer source manuscript used by Mallory, also placed Camelot in South East Wales. Stained glass windows exhibit pictures of the dynasty in Llandaff Cathedral, and also full feature illustrations of King Arthur II and his grandfather King Tewdrig. All this was taught in the local schools until 1924.

Readers may be astonished that there could be a "black hole" on the historical map of British history. The evidence, however, is so varied and massively overwhemling that the case being made is indisputable. To illustrate this, G J Williams alleged that the Coelbren alphabet of South East Wales was forged around AD 1800. Strangely, Julius Caesar described the alphabet in his De Bello Galico in 54 BC. Ammianus Marcellinus also described this alphabet. Even better, when Mohammed Ali discovered in 1946 the entire 128 books in 14 leather satchels of a Gnostic Christian library buried at Nag Hamadi in Egypt before AD 400, the book of Massanes contains a description of the same alphabet. Welsh poets writing pre AD 1367, 1425, 1450, 1470, 1580, and so on, all speak of the same alphabet - allegedly forged in 1800! Several ancient stones dating from circa 600-1200 carry letters of the alphabet. A manuscript in the Bodleian Library in Oxford of circa AD 1520 contains the alphabet.

This book simply sets out the history, the sites, the stones, the places to go. Every single site named in this book can be visited, every stone can be seen and touched, and every manuscript is available to be read...