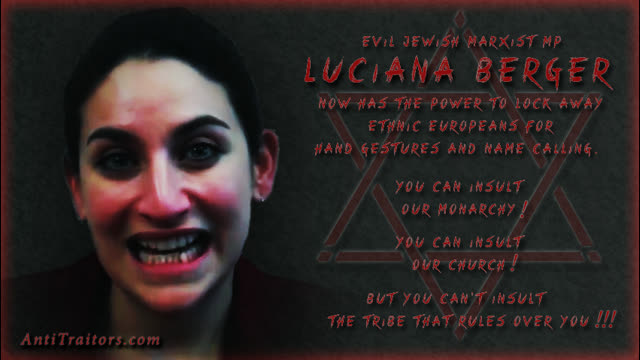 Luciana Clare Berger is a Jewish Zio-Marxist Labour politician and the great niece of Manny Shinwell, Jewish trade union official, leading figure of Red Clydeside-Jewish Marxist extremism that characterised the city of Glasgow in Scotland from the 1910s until roughly the early 1930s and the Jewish politician at the heart of Clement Attlee’s Labour cabinet. Shinwell campaigned vigorously for Britain to support the Marxist insurgent government in Spain against Franco in the Jewish push for dominance over our European folk.

The aftermath of WWII continued to be a time of hunger and poverty, with strict rationing still in effect the Jewish black market trade was unremitting. Tensions continued to build as Jewish agitators attacked patriots in the street and information was leaked to the public of the Jewish terrorist Abba Kovner’s plot to murder 6million Europeans via their water supply. By November 1947, following the kidnap and brutal murder of 2 British soldiers and plot to fire bomb the London capital from the air by Jewish terrorist group Irgun, it was discovered that Shinwell was passing strategic information to this Jewish terrorist group; this lead directly to the bombing of the King David Hotel in which 91 people were murdered including 28 Britons. Nevertheless, rather than punishment for subversion Shinwell became Secretary of state for War; an area of particular sensitive information no doubt of strategic importance to his Jewish contacts and a position which he held until 1950. The British public’s frustration at governmental lack of response to the loss of British life due to Jewish terrorism and subversion finally exerted a hostile reaction. In Birkenhead, near Liverpool, England slaughterhouse workers refused to process any more Kosher meat until attacks on Britain and British soldiers stopped. The Jewish response was belligerent and riots broke out in Liverpool, spreading to London and Glasgow. Shinwell had an egregious history of insurrection being a key figure in the six-week Glasgow seamen’s strike part of the nationwide transport strike, beginning on 14th June 1911. Neatly coinciding with Lenin’s last visit to Britain and virtually mirroring strikes in Liverpool lead by Communist Tom Mann, the sexually compromised Churchill unleashed gunboats on the city an over reaction that only compounds the strategic Jewish nature of these incidents. Later in January 1919, Shinwell lead clashes between police and protesters in Glasgow’s George Square. He was the shadow behind Ramsay MacDonald having strategic positions in both MacDonald’slabour Governments. In light of this relationship MacDonald was even to reflected Marx notion of the Scots as racial trash that must be destroyed in Socialism: critical and constructive, published in 1921, when he wrote: “The Anglification of Scotland has been proceeding apace to the damage of its education, its music, its literature, its genius, and the generation that is growing up under this influence is uprooted from its past.” MacDonaldwas later implicated in an act of treason against the British people. Written by the Jew Zinoviev and delivered by the Jewish double agent Reilly, the 1924 ‘Zinoviev letter’ was garnering support “(a loan to the Bolshevik Government)” and rallying for revolution “in the armed forces” against the British Authorities. A Jewish informer with a history of strategically organised violence Shinwell’s involvement in a Jewish Bolshevik conspiracy that lead to the fall of the first Labour government is a given. While he was tried for incitement to riot and sentenced to five months’ imprisonment in 1919 it fails to conceive Shinwell’s insidious agenda that focused on the subversion of a nation through terrorism and division. To postscript the Shinwell family following his arrest for stock market fraud in 1964 it was revealed that Shinwell’s son Ernest had direct connections to the Jewish Kray Twins. Indeed it was Labour MP Ernest Shinwell who introduced Jewish mobster Ronnie Kray to the sexually compromised Lord Boothby ‘engineering’ the homosexual scandal that collapsed the Conservative Government.

One of the three leading Jewish influences in the North West of England others being Beatrice Fraenkel currently an NHS board member and the Jewish Zio-Marxist MP Louise Ellman, Berger herself continues the vile family tradition with heavy involvement in the Liverpool Care Pathway program. The pathways program was a determined effort by the Jewish tribe to exterminate the elder members of the native (Caucasian) British population. Hospitals are paid millions to hit targets for the number of patients who die on the LCP. At least £30m in extra money is handed to hospitals to achieve these goals. Quite literally hospitals are encouraged to slaughter their patients because they get paid for it. To distract from her role in the genocide of elderly Britons Bergerconsistently evokes the Jewish ‘false flag’ allowing her to play the ‘eternal victim’ for the press. Whilst natives are starved of basic justice in the climate Berger has created our people are thrown in jail for nothing less than name calling. Indeed given Berger’s family history the accusations of “Tel Aviv’s servant…a paid-up Israeli operative…and an absolute parasite” would hardly form a case for defamation of character let alone a custodial sentence. Yet building on her families terrorist past the threat is conspicuously comparable with the Jewish Bolshevik punishment of death for those convicted of ‘anti-Semitism’ in post 1917 Russia. This should give the public a clear notion of what our Jewish masters have in store for its seized populations.

From the beginning the Labour movement, in which Berger and her family has been heavily involved, has been working for Jewish interests. From the seizure of Eastern Europe starting in 1917 to the theft of Palestine in 1948 the Labour Party has played a major role. Sidney Webbwas a Jewish Bolshevik who set out the aims and values of the constitution of the British Labour Party making Palestine an integral part of the Labour Party agenda from its inception. As Colonial Secretary Webb facilitated increased Jewish immigration into Palestine during the 1930s. With first Labour Party Prime Minister Ramsay MacDonald’s close relationship with Lenin, playing host to him in 1907 during a congress of the Russian Social Democratic Labour Party (RSDLP), it was inevitable that he was implicated in a Bolshevik conspiracy in 1924 that would set this country on a path to Jewish Bolshevik domination through Communist revolution (Zinoviev Letter). With this in mind it is not hard to believe that the Labour movement was a Jewish endeavour from the onset.

Therefore, Just as the aims and values of Labour’s initial constitution were written by a Jew so it must be amended by a Jew for a new generation. As such in keeping with her fondness for the false flag Berger is spearheading the campaign that will force in a new constitution under the guise of a party split. Reminiscent of her ancestor the Jewish ‘converso’ Torquemada Berger’switch hunt appears confined to the Labour Party yet in her search for ‘heresy’ against her tribe in the name of ‘anti-Semitism’ Berger’s net casts nationwide. Consequently considering how many in the UK city of Liverpool have awakened to the nefarious Jewish plan of global dominion keeping anti-Semitism at the top of the agenda at the Labour Party Conferences in Liverpool would produce the ideal conditions for the usual Jewish false flag. Now it is not being suggested that we are worth anything too dramatic like an explosion. However, an anti-Jewish poster campaign similar to the very professional London incident completed under the watchful eye of its 500,000 security cameras and vigilant police force could warrant midnight raids and therefore ‘justify’ a Jewish adjustment to our laws. While in Russia Jewish Bolsheviktyranny was overt still here it closes in on all sides. The use of the Labour Party to keep anti-Semitism on the agenda conceals the greater Jewish global plan focusing on changes in European law that will end in the death penalty for questioning the Jew just as in post 1917 Russia. 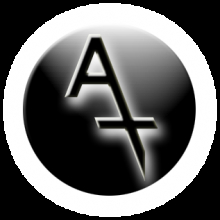 AntiTraitors
Published on Sep 11, 2020
An autonomous group of white European activists, dedicated to driving anti-European treachery from the streets of Europe. The nature of this treachery lies with the infiltration of alien ideas into Europe. The key destructive element is JUDAISM the basis for which the Jewish theorist Karl Marx under the supervision of the Jew Moses Hess the philosophical father of Zionism invented Communism. Cultural Marxism i.e. political correctness is the current expression of this. The success of Marxist politics depends on a divided and demoralised ethnic European and a debased European ancestral land. Thus Marxism is a systematic program that violates the core of traditional ethnic European society. The European public are exposed though a number of policies-mass coloured importation, enforced integration, sex and homosexuality in the classroom, and ‘transgender’ mutations that methodically test the limits of European sensibility. Equally divisive is the Marxist strategy of segregation. Not only is the coloured used against the white but woman is pitted against man, child against adult, homosexual against heterosexual, even the disabled against able bodied manufacturing false ‘victims’ and deliberately fracturing European society. Therefore, it is only through unity that ethnic Europeans are able to defend themselves. As such Antitraitors exist to confront Marxist ideas, activities, and organisations wherever and however they occur. You can find our website here - https://antitraitors.com